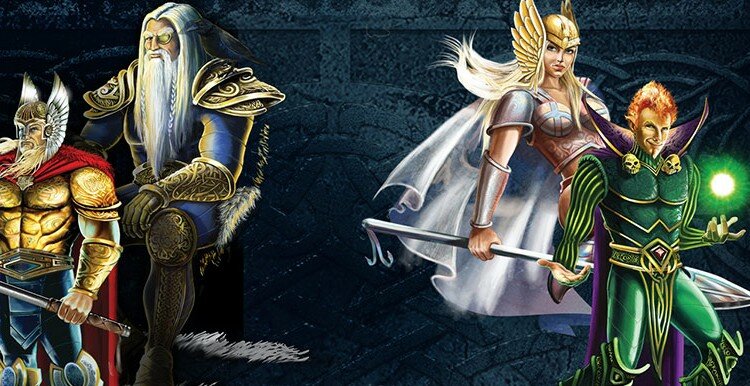 Microgaming’s Thunderstruck II slot is one they use regularly in Slot Tournaments but in tournament mode, only one feature is enabled. This review gives you some detail about the game and all the other features as it’s a game I play a lot in real-money mode.

After the popularity and success of Thunderstruck I, a high-variance 9-line affair, Microgaming gave the concept a complete revamp in their  usual style, and created the 243-way Thunderstruck II. The game is hugely different in that it has no winlines, but needs 3 or more consecutive symbols for a win anywhere on from left to right. 3x3x3x3x3 therefore means 243-ways to win.

Thundstruck II’s symbols are the usual 9.10.J.Q.K.A plus the Norse Myths making up the other 6, being Longships, Valhalla, Valkyrie, Loki, Odin and of course the might Thor himself. Thor’s mighty hammer is the scatter which again needs 3 showing anywhere to trigger the bonus rounds. An animated ‘II’ is the wild symbol which doubles any win in which it forms a combination.

The wilds are positioned between the number/letter symbols so cannot appear on the same reel as character higer-payiny symbol. Don’t be concerned by this; a win of say 5 aces of which 2 or 3 have a wild in view with them pays significantly more than any character win! For example 5 Aces with 2 wilds will pay the 5 aces, and 3 combinations of doubled Aces which would pay 35x stake, more than 5 Thors including a wild!

Of course two “Thunderstruck II” logo scatters pays a credit too when they fall in, and if two fall in anywhere in the first 4 reels, the remaining reels will spin slowly in typical ‘heartstopper’ fashion, although in ‘quick spin’ more this will be avoided. Should a third drop in with Thor’s hammer making a reassuring ‘clang’ then you find yourself in the ‘Great Hall Of Spins’…….

So 3 (or more!) scatters got you into the Great Hall Of Spins – now what happens? Well, you need to progress along the 4 different bonus rounds. Every 5th. feature opens up a new one of the four bonus rounds. So, the first is the Valkyrie 10 free spins feature, which pay at 5 x multiplier and can be retriggered. This seems to be the highest-variance feature as it can pay fom 0 x to over a 1000 x stake. Hitting any 5-line win with a wild  pays well as effectively it’s paying 10x the basic win in normal play. Hit 5 scatters and you get 1000x just for that spin! The reels are the same as in the base game.

On the 5th. bonus, Loki’s ‘magic Wild’ feature is available. This is 15 spins with a special wild on the centre reel which can expand to fill any position with a wild. It has to be said, it expands to the right 99% of the time (and it isn’t guaranteed to appear even once in your 15 spins!) so in reality you want to see reels 1&2&4 with matching good symbols, the Magic wild on reel 3. Why? Because most of the time the wild will reach out to reel 5, completing a good payout. On rare occasions, it will go left and create an unexpected payout and has been know to even fill 9 or 10 symbols up as wilds.

On the tenth bonus you will find Odin’s 20 spins with random 2 or 3x multiplying extra wilds. You need any winning combination to appear, except scatters to trigger these extra wilds. Should a win come in Huginn and Muninn, Odin’s ravens will swoop down to add a multiplying wild to the win. The ravens can only fly to reels 2,3 and 4. The left hand raven is a 2x wild and can fly to reel 2 or 3, the right hand one a 3x wild which can fly to reels 4 or 3. Usually only one will fly, being the 2x one. On rare occasions both may fly down giving a 6x multiplier. If you already have a wild in play, that effectively increases the combinations (unless Huginn or Muninn cover it bah!) and make the wins up to 12x base amount. This is a lower variance round and huge wins are rare.

Whne you have your 15th. bonus trigger you complete the full set and now have Thor’s 25 spins with falling reels. Any win will see the winning symbols spectacularly explode to be replaced by falling symbols from above. Should these make another win then this will have a 2x multiplier and so-on up until 5x. This is by far the lowest-variance round and I have never heard of it paying zero, like I have seen in the rest several times.

The reels are different with character symbols side-by-side unlike the base game. It’s a long round too. it can also pay massive wins. You can get multiple Kings for example dropping down and not forming winning combinations, and then the reels line up and the missing King drops in when on the 5x multiplier for an 8-combination of 5-reel King wins. Cue the big win display…
The large wins however tend to come when the first 3 reels line up the same, so every time they drop you are guaranteed a win, and they do this up to 15 times before losing alignment. During this the 3 wilds will drop in, and should you have unused matching symbols on reels 4 and 5, or even a wild on 5 (by now you will be at 5 x multiplier) the wins can be colossal, 500+ times stake just for that last drop.

You also have a table of ‘Achievements’ too. All possible wins, that’s 3,4 and 5-reel are lit up with a gold light in the paytable. Getting 5 wilds or scatters may take some time though! When the paytable is completely gold, what happens? Nada, zilch, nothing. It’s just eye-candy and rumours the game pays more thereafter are just that!

Have I missed anything? Of course! The randomly activated ‘Wildstorm’ feature! On any spin in normal play, the reels may keep spinning, and Thor drops down in full battle mode. His lightning bolts will turn 1-5 reels wild, and the rest drop in. They are different with no wilds or scatters on them. Usually you will get 1 or 2 reels, and depending on which ones they are you are not guaranteed a win. 3 reels is rare, 4 a dream and 5! well that’s the games jackpot. £2430 for a 30p stake!! The odd thing is, should you get the first 4 reels wild, you have 81 x a 5-reel win for the 3 symbols which appear on reel 5 plus you get 81 x 4 wilds, as the wilds pay separately. This results in 324 wins on a 243-way slot. Ahem…I erm…actually got this once – see the picture 🙂

This game has formed the foundation of many 243-way games since. It is colourful, has great sound effects and combines the possibility of large wins with varying features. The frequency of low-medium wins in the base game usually ensures a good session for your money. Bonus rounds occur on average every 140 spins and make up about 15% of the return to player over time. This was a winner when realeased and has proven to have enduring popularity with players since.

My verdict: Thunderstruck II is a classic of modern online gaming!

Thunderstruck 2 is used in Microgaming slot tournaments only.